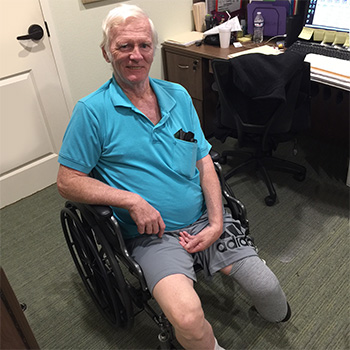 I want to share with you the best Christmas gift I could imagine.

It’s a long story (and most of the good ones are) but I’ll boil it down for you.

I was visiting a center yesterday and a team member stopped me and said “Luke, I have someone that wants to meet you- do you have a minute?” Of course. So in rolls Mr. Martin. Click on his picture.

There he is. Grinning ear to ear. One leg. An arm that stopped working 14 years ago because of a stroke.

I wasn’t sure what he wanted to say. Looking at him I could tell that he’d gotten a lot out of life, know what I mean? He was born and raised in Flushing Queens, New York. He worked for the Federal Reserve Bank and drove a cab in the Bronx (until a stick-up man pointed a loaded gun at his head and told him to give him all his money.) You get an idea of his sense of humor when he tells you he felt bad for the guy. “I just started my shift and only had 2 fares. The poor guy only got $10.50.)

Mr. Martin credits his dispatcher at the cab company for saving his life. He was alone in his apartment when the stroke hit. Massive cerebral hemorrhage. He fell to the floor and couldn’t get up. After struggling a long time he finally said to himself “well, I’m done. Might as well go to sleep.” He talks with that sort of thick- “been there done that- no big deal- life doesn’t owe me much” attitude. (Think John Wayne meets Jimmy Stewart.) Well when he didn’t start his cab the next morning his dispatcher, the retired police chief of Great Neck, New Jersey called law enforcement and EMS and told them to get over to Mr. Martins apartment. Something had to be wrong if John didn’t show up for work. They saved his life, but doctors said he would never walk again.

When his therapist at Holy Cross Rehabilitation asked what he hoped to accomplish he said “I’m going to walk out of here.” She looked at him like he was crazy but a year later he did. When people ask him how he’s doing he holds up his droopy left arm and says “well, the left arm doesn’t work so I must be all right!”

He eventually moved to Florida to be near his sisters. He got himself a place and settled in. He has the sweetest pup. An English Springer. Named him Harley after the motorcycle.

A lifelong diabetic, he began losing vascularity in his left leg. A couple of surgeries to restore blood flow didn’t work and 6 weeks ago his doctor told him “it’s not a choice, your leg has to go.” (We’re getting closer to the gift- I promise.)

Mr. Martin had a lot of choices for rehab but he chose Palm Garden. He said he has been in two others through the years and they don’t compare. I asked him why and he said “because at Palm Garden they treated me like a member of their own family, you can tell they care.” He said that his wound care specialist was so tender and caring- even as she was packing his open wound with gauze. He said they both celebrated the day she told him she couldn’t even get a cue tip in there anymore. He said therapy was firm but supportive. He said their favorite thing to say was “John, good job! Now 10 more!” He said they helped him accomplish more than even he thought he could. He said Hannah got him to the point where he could balance on his one leg for a long time. (A must if he’s going to be independent again.) When he sat down and it cramped up- she massaged it for him.

The day he arrived at Palm Garden Tampa he was in so much pain. He said the worst was the phantom pain because his leg was gone but it still hurt. Mr. Martin would wake up with pain starting between his second and third toe and shooting up to his knee. He would scream in pain. The same team member that welcomed him held his hand and comforted him. I asked if he was going to get a prosthetic? Frank, our physical therapist who has been with us 18 years had ordered it. I asked if he was going to see a doctor once he got settled? Seretta, our Social Services Director made the appointment. I asked if he was going to have the prosthetic fitted and do therapy? “They already set it up. Frank measured it, the doctor wrote a script and the business office got it approved through my insurance. I’ll be back here for outpatient in a couple weeks as soon as my leg gets in.”

At his celebration home about 20 Palm Garden Tampa team members thanked him. They said he had a lot of choices and they appreciated him giving us the opportunity to serve him. They gave him full credit for his hard work and his positive outcome. They gave him a celebration certificate and he beamed with pride. They said they looked forward to seeing him in a couple weeks for outpatient and that he’s a Palm Garden Member for Life. And then he said:

“Thank you all but we’re not done here. I have something to say. If I die when I get home, it’s going to take the undertaker a month to wipe the smile off my face. You all have been wonderful, I feel like family.”

Christmas isn’t about money or presents. It’s about people. It’s about feeling. It’s about faith. And it’s about our ability to put a smile on Mr. Martins face through perfect execution of The Palm Garden Way “…it’s my pleasure.” The gift is ours to give and to receive. Best gift I could imagine.

We are just so proud of our Palm Garden Family. 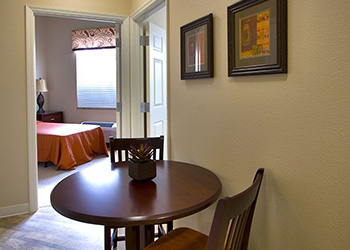